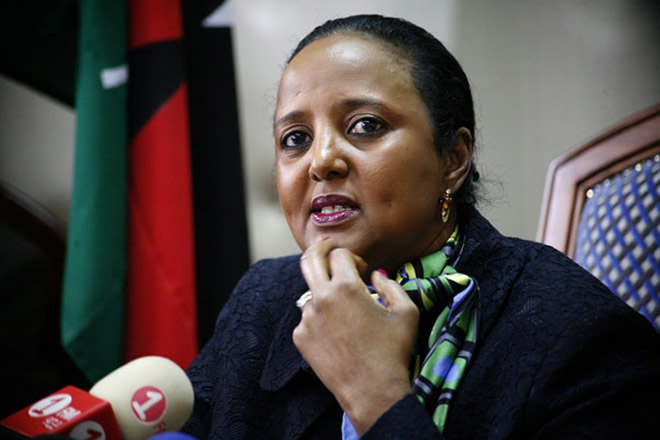 The Ministry of Sports seeks to move quickly on incentives for international equipment donations to benefit Kenyan sportsmen and women.

Cabinet Secretary for Sports Amina Mohamed reveals talks with her counterpart at the Treasury to expedite a tax waiver on donated equipment from outside the country.

In the past, the government has waived tax on sporting equipment imported into the country but it created a loophole which unscrupulous individuals exploited to import cars and motor vehicle spare parts under the pretext that they would be used for rallying competitions. That forced the government to reinstate tax on the equipment.

However, Amina said that the tax waiver, if granted, will only be applicable to sports donations, with local sports federations proving the origin of such equipment.

Amina was speaking on Monday night at a dinner hosted for visiting ISSF president Vladmir Lisin by the KSSF at Villa Rosa Kempinski, Nairobi.

Before the dinner, Amina held a meeting with Lisin, who was accompanied by the ISSF secretary-general Alexander Ratner. The meeting was attended by KSSF chairman Shoiab Vayani, Major-General Fatuma Ahmed, who is also the KSSF patron, and National Olympic Committee of Kenya (NOC-K) president Paul Tergat.

“During the meeting with Lisin and other stakeholders, the issue of taxation came up. It’s a major stumbling block to sports development and we shall do something about it,” pledged Amina, who said Lisin’s visit was “historic” since it was the first by any ISSF president.

Lisin said he wanted support and commitment from the Ministry of Sports, NOC-K and KSSF in an effort to develop shooting facilities in Kenya so as to make the country a shooting hub in Africa. Lisin promised to donate Olympic electronic target and training weapons to KSSF.

Lisin also donated Shooters Training Systems worth over Sh1 million to Amina for use by Team Kenya in preparation for the remaining 2020 Olympic qualifiers.

Tergat noted that shooting was worthy of support and hoped that Kenya would qualify firers to the 2020 Tokyo Olympic Games and 2022 Youth Olympic Games.

Fatuma welcomed Lisin’s visit, saying that Kenya stands to benefit immensely should the country be made a shooting hub. Vayani said the move will see local sports facilities being upgraded.

Shooting, rallying and golf are some of the sports that use expensive equipment that attracts heavy taxation and a waiver on donations will go a long way in developing these sports locally.

Some NOC-K affiliates have in the past received donations from international bodies but ended up losing them owing to the heavy taxation levied at the port.