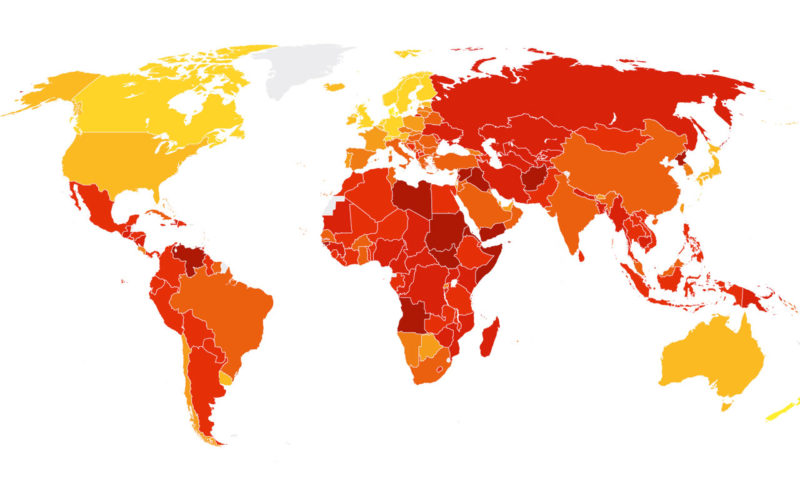 Rwanda and Tanzania are making progress toward limiting corruption than their neighbours in the Eastern Africa region, according to the recently released Corruption Perception Index Report for 2019.

The report produced by  Transparency International ranked Rwanda at number 51 while Tanzania at 96.

Kenya and Uganda were both ranked at number 137 while Burundi and South Sudan came off as the worst performers.

Speaking at the launch of the report which assessed 180 Countries around the world, Peter Wandera the  Executive Director of Transparency International Uganda attributed the good performance of Rwanda on strong Political Will towards the fight against corruption.

“Rwanda is good at enforcing rules and regulations related to the fight against corruption. This is not the case in other countries in the region that’s is why the level of corruption is going down, “he explained.

He said Rwanda has strong institutions that are highly supported when it comes to the fight against corruption.

Wandera cautioned other EAC countries to borrow a leaf from Rwanda if corruption is to be eradicated from the region.

The report analysis shows that countries that perform well on the Corruption Perception Index have strong enforcement of campaign finance regulations and a broader range of political consultation.

“The Corruption Perception Index shows that corruption is more pervasive in countries where big money’s can flow freely into the electoral campaign and where governments listen only to the voices of wealthy or well-connected individuals “read’s part of the report.

To avert corruption and restore trust in politics, the report recommends that Government s should take strong mechanism to prevent opportunities for political corruption and to foster the integrity of political systems.

In order such recommendations to be realized, Cissy Kagaba the Executive Director of Anti-Corruption Coalition Uganda advised African countries especially those in East Africa to come up with strong regulations that regulate political campaigns financing.

“We don’t have any law which regulates how much should political parties spent in their campaigns.

“That’s why we are seeing a lot of government resources being spent to finance campaigns for the party in power,” she said.

As a way forward John Marry Odoi the Chairman Board of Directors Transparency International Uganda said the government need to empower citizens and protect activities of media and whistleblowers since they play a big role in fighting corruption.

The top countries that performed better in the year 2019 in fighting corruption are New Zealand, Denmark, Finland,  Singapore and Sweden while the worst performers were Somalia,  South Sudan and Syria.